Why campus sexual consent policies should not call out disability

For several reasons, it is unwise for university sexual misconduct codes to isolate disability as a special category (nor do I think disability should be statutorily isolated in sexual assault law). The United States has a particularly insidious history of controlling—by law—the erotic and reproductive lives of women considered disabled. This history is inseparable from white supremacy, and the rendering of poor women, women of color, and criminals as disabled in order to control their reproductive lives. This history, compounded with the cultural desexualization (and occasional hypersexualization) of persons with disabilities, builds a winning case for not isolating disability in code.

As another example, codes proscribe sex with people who are substantially impaired, unconscious, and so forth (this is my language, not the language of any particular code verbatim). Blackout drunkenness and serious inebriation seem to be the underlying concerns motivating these clauses, but presumably the thresholds could carry over—theoretically and with extreme caution—to cases of severe cognitive disability.

I say “theoretically” for two reasons. First, because it is all but unfathomable that someone so intellectually impaired that she cannot meaningfully consent to sex is enrolled as a college student. Second, because to the degree that there are people in the world who are indeed so severely intellectually disabled that they cannot meaningfully consent to sex, it strikes me that such people need a great degree of support and care in all zones of life, sexual or otherwise, and that here we might want to think about sexual pleasure more like other daily activities: bathing, eating, grooming, sleeping. Insofar as some cognitively disabled persons need significant help in these regards, they may also need help in experiencing sexual pleasure (if there is some way to read assent and/or interest off their speech or conduct). In other words, it is not immediately evident to me that simply because someone’s intellectual disability is labeled “severe” or “significant” means she should automatically be disqualified from sex. Of course, this is the thorniest question around sex and disability. 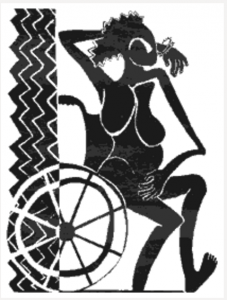 Disabling consent, or reconstructing sexual autonomy: Joseph Fischel, Hilary O’Connell (Columbia Journal of Gender and Law, 2015) This article re-examines “sexual autonomy” for people with disability through the lens of a 2012 Connecticut Supreme Court decision overturning a conviction of sexual assault against a woman with mentally and physically disabilities. The writers argue against equating sexual autonomy with sexual consent.

Sexuality, rape, and mental retardation: Deborah Denno (University of Illinois Law Review, 1997) This groundbreaking article explores the question of when sexual relations with a person who has intellectual disabilities should be considered nonconsensual and criminal. Denno finds that courts typically hold intellectually disabled individuals to a higher standard of consent than nondisabled people—an unnecessarily broad and moralistic restriction. She argues that most mentally retarded individuals have the capacity to consent to sex, and they have the right to do so. 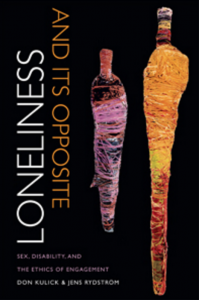 Loneliness and its opposite: Sex, disability, and the ethics of engagement: Don Kulick and Jens Rydstrom (Duke University Press, 2015) This book is an ethnography on facilitating sex in the lives of people with disabilities in two countries (Sweden and Denmark). The book “charts complex boundaries between private and public, love and sex, work and intimacy, and affection and abuse. It shows how providing disabled adults with access to sexual lives is not just crucial for a life with dignity. It is an issue of fundamental social justice with far reaching consequences for everyone” (publisher).

[Some summaries are based in part on the article abstracts.]